Charles Perrault was born on this day 1628 in Paris, France.  Perrault began his career as a lawyer, but had a penchant for poetry, and writing.  He is most famous for his book Histoires ou Contes du temps passé (Stories or Tales of The Past) which included eight famous stories we are all familiar with listed below: 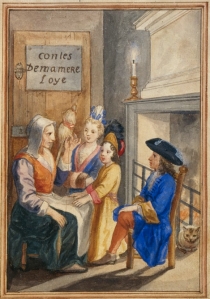 Charles Perrault was born into wealth and prestige, and was highly educated, and an excellent student. Perrault was successful in the law, and worked for the government under King Louis XIV.  He was elected to the Académie française in 1671.  Ironically while in the Académie, he was involved in “The Quarrel of the Ancients and the Moderns”, a bipolar dispute that pitted ancient literature up against modern-day writings.  Perrault took a modernist stance believing that ancient literature was not as sophisticated as modern literature.

Charles Perrault became a widower after only six years of marriage.  His wife bore three sons, and a daughter.  He was forced to retire from government life at age 56, and went home to care for and educate his four children.  In 1697 at age 69 he published Histoires ou Contes du temps passé.  This is a great lesson for all writers that it’s never too late to pick up quill and parchment, Underwood, or Apple.  It was his love of oral folklore telling, and the subsequent rewriting of those tales that have allowed them to be passed from one generation to the next; not quite the modernist after all.

He is the inspiration for my story The Full Worm Moon, and I am happy to wish him a Happy 388th Birthday.  It is an impressive feat to remain so relevant after death, and to continue to touch so many minds with such wonderful storytelling.